Bernadette Elliott was admitted to practice in 1984 having studied at the Council of Legal Education and serving her Articles of Clerkship under Mr Raymond Triado of the firm Triado Marshall and Lukadis. Upon completing her Articles Mrs Elliott started her own law firm which continues today. Mrs Elliott practices in all general areas of law but particularly in the area of Family Law. Mrs Elliott appears in a variety of jurisdictions, including the Family and Federal Magistrates’ Courts and in the Victorian Magistrates’ and County Courts.

Basil Stafford was admitted to practice in 1977 having completed his Bachelor of Law at the University of Melbourne. He attended the College of Law in New South Wales and, on his return to Victoria, was called to the Victorian Bar. After 30 years as a barrister Mr Stafford joined this firm as In-House Counsel. Mr Stafford has practiced extensively in the area of Local Government Law for over 25 years and has a wealth of knowledge in relation to all departments of Local Government. Mr Stafford appears in the Victorian Magistrates’ Court, County Court and Supreme Court and in the Victorian Civil and Administrative Tribunal.

Alison May was admitted to practice in 2010 having completed her Bachelor of Law (with honours) and Bachelor of Arts at Monash University. She completed her Supervised Workplace Training under the supervision of Bernadette Elliott. Basil Stafford moved her admission in 2010 and Alison May has worked with the firm since. Ms May enjoys the full variety of this firm’s areas of practice and appears in Victorian and Federal Magistrates’ Courts.

Sam Turner graduated from Queensland University of Technology in 2015. Following completion of a Graduate Diploma of Legal Practice at the same university, Sam was admitted to practice in Queensland in 2018. Sam runs all of the firm’s conveyancing, wills and probate matters and assists in local government prosecutions. He appears in Magistrates’ Court matters.

Millie has been with the firm for four years and is the welcoming face and voice of the firm. 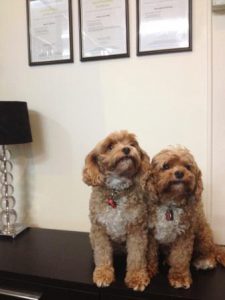 Louie and Chloe are the firm’s beautiful Cavoodles. They work, usually, on a full-time basis providing love and affection to staff and clients alike. They are particularly popular with and a welcome distraction for children. They have proved to be a great comfort for clients who are going through a difficult and emotional situation.

Contact us to arrange a consultation with one of our qualified lawyers.